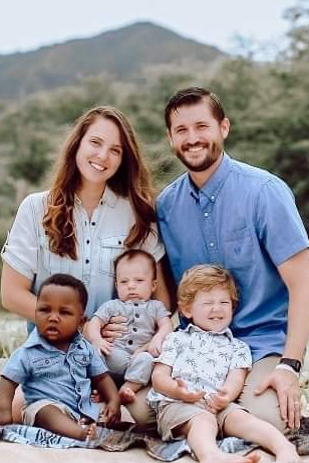 Jake and Hali Woodfin were approved as WBF Home Missions church planters in 2017.
Jake was born into a church planting family.  Growing up in church, he heard the gospel and had it explained to him many times.  However, when he was four years old, after completing a bible study, he realized his sin and his hopelessness without the sacrifice of Jesus.  It was then that he trusted in Jesus as his Savior.

When Hali was five years old, her best friend accepted Christ as her Savior and everyone was so excited for her that Hali decided she wanted to be saved too. Being a pastor’s kid, Hali could give all the right answers and she convinced everyone that she had given her life to Christ. However, she knew the truth. It was not until she was 12 that she truly repented and asked Christ to be the Lord of her life. At the time Hali was too afraid to tell anyone because she was fearful of what they would think. She kept it a secret for 4 years until at 16, she finally shared with everyone the truth about her salvation experience and was baptized.

God laid on both their hearts to plant churches while they were getting to know one another at Bible college.  Specifically, they felt the call to start churches in places where the gospel witness was the lowest.

They prayed for many different areas that they felt God was placing on their hearts and after many months of diligent seeking, they came across some statistics done by a Christian research group. This study found that the Bay Area of California is the least churched area in our nation.

God would not allow them to forget this great need for more churches so they have committed to start multiple churches there in the Bay Area of California.

Jake and Hali both grew up in pastors homes.  Jacob's dad planted churches in Texas, Hawaii & Indonesia.  Hali’s dad was a pastor in Texas and served for many years on staff at a Baptist College.

Jake and Hali have three children:  Tekoa, Judah, and Zion