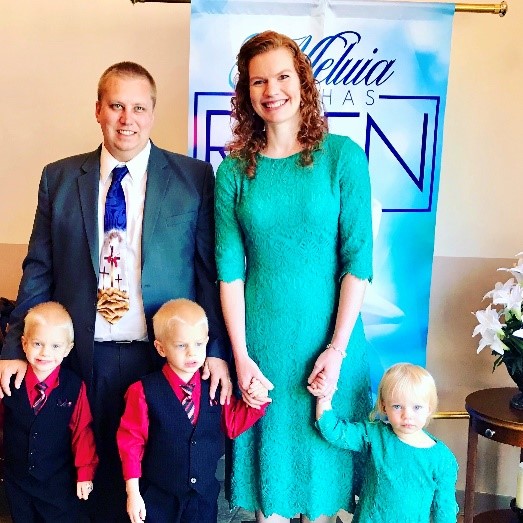 Todd accepted Christ as his Savior at an early age.  Shortly afterwards he knew God was calling him into missions and he surrendered as a young teenager.  He strayed from the Lord for a few years and when he was 24 Todd rededicated his life to the Lord.  He started serving God wholeheartedly in the church and became involved in soul-winning, bus routes, children’s’ ministries and mission trips. God brought Sarah Cato into his life in March of 2015 and on Todd’s visit to Southern Brazil in December of 2015 God convicted him about surrendering his life to serve Him in Brazil.  He came back from this trip and began preparing himself and is currently studying by distant education at Southern Indiana Baptist College in DuPont, Indiana.

Sarah was approved as a World Baptist Fellowship missionary in 2013.  She was born and raised in Brazil.  Her parents are WBF missionaries David and Diane Cato.  She was eight years old when she accepted Christ as her Lord and Savior.  She knew that God wanted her to go to the mission field since she was 12 years old.  Sarah graduated from Heartland Baptist Bible College, Oklahoma City, Oklahoma in 2012 with a Bachelor of Christian Education degree with a major in missions.  She has served the Lord as a Sunday School teacher, pianist, teen camp counselor, VBS worker and in ladies’ meetings.  She loves music and wants to use the talents God has given her for His honor and glory.  Sarah served as a  single missionary under her parents' ministry for two years until God brought Todd into her life.

Todd and Sarah were married June 4, 2016 at the Calvary Bible Baptist Church in Navarre, Ohio.  They began deputation, planning to go to the city of Blumenau in Santa, Catarina, Brazil.  Due to some unexpected health issues with Bro. Todd's feet, Todd and Sarah had to resign as WBF missionaries in 2020.  Since that time, Bro. Todd has had surgery and is beginning to recover well.  In summer of 2021, God opened the door for them to revitalize a struggling church, Bibleway Baptist Tabernacle Baptist Church, Suck Creek, Tennessee (right outside of Chattanooga).

They have twin boys, Aiden & Josiah and a daughter, Scarlett.