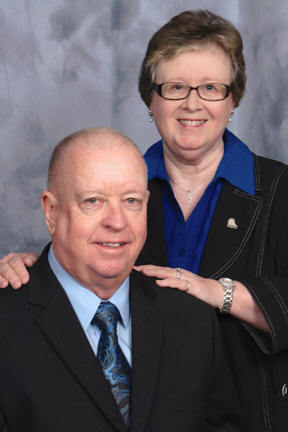 Both Gary and Monnie were raised in Christian homes and saved at an early age. Gary was saved in April, 1955, at the Trentman Ave. Baptist Church of Fort Worth, Texas.

After high school graduation Gary served four years in the US Air Force. While stationed in Big Spring, Texas, he attended Trinity Baptist Church where he met his future bride, Monnie. In 1971 he felt God's call into missions and entered Arlington Baptist Schools in Arlington, Texas. He graduated in May, 1976.

Monnie was saved at Trinity Baptist Church of Big Spring, Texas in June, 1966. She surrendered to missions at the age of fifteen and moved to Arlington, Texas, to enter Arlington Baptist Schools. She graduated in May, 1974.

Monnie and Gary were approved as World Baptist Fellowship missionaries in August, 1977. They arrived in Bogota, Colombia, September, 1979. Because of the adverse conditions in Colombia they were forced to return to the US in 1989 after serving two terms in Bogot. In December 1989 they moved to Saltillo, Mexico, to work with the Mexican people. Their work now is in Matamoras, Mexico.

The Bacons have two sons, Jeffrey and Joey.